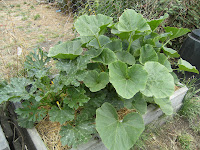 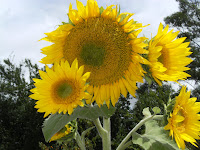 Well things have been growing like mad in the veggie patch! The Pumpkin gone off and is huge, starting to get tiny little pumpkins on it! We have been eating carrots from the patch, and the lettuce seedlings we planted is doing quiet well too. I have finally been able to locate a male kiwi fruit and brought a trellis for the vines to grow up so it doesn't pull on the chicken wire.

I also brought another Fejoa that is more of a bush than a grafted plant as my other one is. Ivé not heard of a Jostaberry pronounced Yostaberry but brought one at Bunnings last week as apparently they love the fronty Winters so I thought perfect for Ballarat! It's a X between a blackcurrent and gooseberry, should be tasty in Jordan's famous Blueberry muffins!

Something is attacking the Japanese Turnip leaves, radishes and rocket it looks to be something eating the leaves so I made up a garlic/detergent spray and have been applying regularly.

Didn't quiet make the window for moon gardening for planting all my leafy veggies, I did put in more lettuces but wanted to plant some endive too and some dandelion, oh well not to long to wait until the next best dates by the moon garden calender, although I will have to wait until February.

Have had to water all the veggies pretty much every day and when we go away camping or for the night I always hope it will rain so I don't lose anything!

I am actually going to sow a crop of Dandelions sounds silly but the leaves are actually very nutricious and the bunnies love them but I would like to add some to our salads and I don't want to risk getting wild inorganic ones. Here's some medicinal info on it;
Diuretic, tonic and slightly aperient. It is a general stimulant to the system, but especially to the urinary organs, and is chiefly used in kidney and liver disorders.

Dandelion is not only official but is used in many patent medicines. Not being poisonous, quite big doses of its preparations may be taken. Its beneficial action is best obtained when combined with other agents.

Have a gorgeous self seeded Sunflower with multiple heads in the garden too, it's just lovely and I should get loads of seeds of it, so nutricious for the chooks!
at January 20, 2010