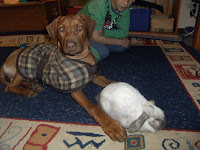 In a house with so many pets, it's vital that they all know their place, and that the ones that can be trained are. Especially as I have 3 young boys that live here too their respective ages being 5, 8 and 11.
I would say for a puppy that no one should buy a dog under the age of 5 and that would be the earliest. Or have the child at an age where they cannot easily get the the dog.
I brought my oldest dog a Golden Retriever when Jordan my 11 year old was 18 months old and he was really being my first child out in the yard alone until he was around 4 years old. Then not with the dog alone as GR's are very boisterous for many, many years and mine is quiet large.
Now we have 17 chickens, 5 rabbits and counting, 3 dogs with one of the bunnies being a house rabbit which means she never goes outside unless supervised - I usually let her and my other adult desexed rabbit Pepa have a run in the veggie garden while I am doing the weeding. Amazingly they don't eat all the veggies!
My house rabbit and all the babies are house litter box trained, this is really to do with rabbits, just confine them to a fairly small area and leave the litter box in the pen and then they will continue to use this once they are free.
My dogs come in pretty regularly and my first challenge in training them was to get them to accept that Sian lives indoors and has free run of the house and is not allowed to be eaten!
Brahma is a Rhodesian Ridgeback and was my first challenge, he is kept in a pen indoors and once settled allowed near the fire place and has run of the lounge area. It really did help that Sian thinks she is a Rottweiler and had absolutely no fear of this puppy or in fact any dog. Basically she didn't run from him and would actually go towards him and charge him at times and completely had him stumped! He never really chased her and their relationship developed into one of a grudgingly mutual respect. If Sian wanted to play they would and if she wanted to be left alone he would do that also.
Phoenix was a little harder to train, he is a sheep dog and while wanting to serve us he also wants to chase and round up ANYTHING including the long grass on our daily walks! He is very smart though and responds very well to weekly dog obedience as does Brahma although being a Ridgeback he is way more laid back and if he feels like doing what is asked he will if not he doesn't! Phoenix the Border Collie wanted to please so when introduced to Sian did follow my instructions to drop and stay and tolerated her getting closer with my close supervision and eventually let me lie him down while she was close to him - although he was very stiff at the time.
I wouldn't leave the dogs alone with the rabbits at all but they are getting better and for 7 month old puppies they are really well behaved, I would ideally like to get Brahma into something way down the track like endurance which is a race where the dog runs along side your bike for I think around 10-20 kms and Phoenix into agility or flyball as he really wants to be worked hard.
at July 12, 2010