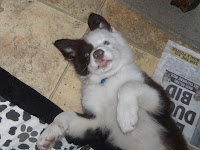 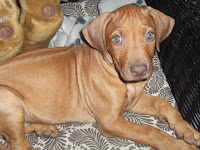 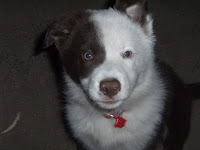 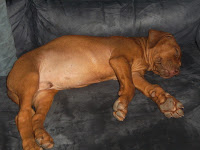 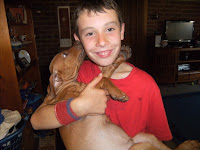 Although this is completely not a self sustainable topic, I cannot skip by talking about my 2 new puppies Brahma and Phoenix, I believe they will both add, enrich and possibly change my life so I feel they are important to include.

Earlier this year in fact of New Years day I was unfortunate enough to lose my 7th baby. I have 3 young boys for which I am eternally grateful for and made the decision that this would be it, no more children. My youngest started Kinder this year and whilst I could certainly put my energies into the garden and my work (Remedial Massage Therapist) I felt I needed something more. My oldest dog Benson is no longer able to walk great distances anymore so I decided to buy another dog and a pound one at that. Unfortunately everyone I enquired about I was not able to even look at due to having young children, rabbits and chickens and I repeatedly told to look at getting a puppy, preferably an 8 week old one.

In pretty much the same week I found Phoenix, a chocolate Border Collie and then Brahma a liver nosed Rhodesian Ridgeback, the story behind Brahma is pretty amazing, I went onto an Internet dog site to look up breeders for a Ridgeback as I have always been interested in getting one and upon searching found the only 2 breeders that had just had pups in Victoria, one was a familiar name.

It was Sally my childhood and very best friend when I was 14! I was amazed and immediately contacted her, and through many conversations and e-mails I eventually went up there and brought Brahma. He is a Liver nosed Ridgeback and was apparently pick of the litter so as an agreement as Sally gave me a huge discount on him we have decided to keep him entire until Sally decides whether she would like to breed and show with him, int he meantime I will teach him obedience basic and possibly go on to do agility or endurance work with him. His Pedigree name is actually "It was fate"!

The story behind Phoenix is an interesting one also as I actually used to work with the breeder that bred him she worked for the Shire I once worked with for 10 years, she was there on a temporary position for 6 months. This is 200 kms away from where I live now by the way! So all very bizarre!

When thinking of a name for Phoenix I really wanted an angel name, or something spiritually significant. I meditated on it and choose a card from my angel card pack and this name Phoenix came up and here is the meaning;

According to the most popular variant of the phoenix, the bird lives in Arabia for 500 years at the end of which, it burns itself and its nest. In the version of the phoenix described by Clement, an ante-Nicene (basically, before Constantine legalized Christianity in the Roman Empire) Christian theologian, the phoenix' nest is made of frankincense, myrrh and spices. A new phoenix always rises from the ashes.

I thought this was fitting as this dog would symbolise a totally new path in my life and moving on from my whole raising babies one.

So far the pups are fitting in nicely although at times they fight they seem to be settling into a nice friendly pattern with each other, they both highly intelligent a complete change for me after owning a Golden Retriever!

The plan is for my eldest son to take the collie and for myself to train the Ridgeback at obedience club for 1 year before moving onto to our specialised fields. I am really looking forward to having something in common with Jordan and to sharing this special time together.
at February 28, 2010