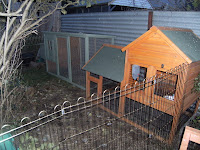 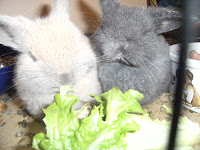 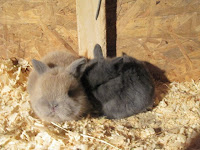 Well it's almost Winter but it didn't feel right calling it the Winter update with 1 more day of Autumn!

I have finally finished the rabbitry and we have 2 new additions to the family with Aurora a fawn blue mini lop and Rhea a blue mini lop to be out show and breeding does. Next week I purchase Ariel our Siamese sable buck, they are tiny 8 weeks old and it will be awhile before any babies are to bred, but we do have a show in June so it will be interesting to see how they go, although an important factor before showing a mini lop is that their ears are fully lopped!

In the garden I have not done a huge amount although I need to do a ton of weeding and pruning out the front, I will save it until the third quarter on the moon cycle which doesn't begin until the 4th June.

We have been eating loads of rainbow chard and lettuce and all off the pak and bok choy is gone used in stir fry's of which we eat many.

This weekend I planted some Chinese lettuces 4 varieties and won bok, bok choy and pak choy and some chicory and kale, the last 2 being veggies I have not grown or used before.

The stakes I used in the garden are keeping all the birds out as we have the odd escapee chicken and they don't seem to able to do much damage.

It's interesting to see the difference in the growth on the bed I did absolutely nothing to and the others were I loaded up the cow manure chicken manure and muchroom compost as the left alone is doing pretty poorly compared to the others but I was following advice that root veggies don't like freshly manures gaden beds as it makes the roots splay.
at May 30, 2010