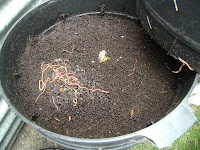 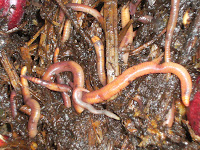 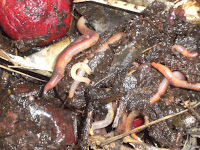 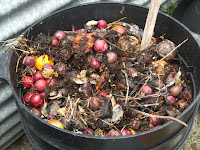 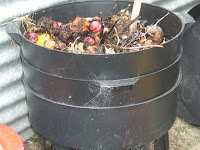 About 6 months ago we decided to buy a worm farm, we already had a compost but it was full and we also had a massive black compost for the dog poo and wood fire ash and still we seemed to have way to many fruit peelings and waste that the chickens were not eating such as citrus, avocado, potato peelings. Now of course we have the rabbits and when indoors they have a litter tray too which is simply mulched paper that also needs to be composted so we decided to get the worms.
Your local Bunnings usually has all you need to start a successful worm farm and it's really easy and great fun for the kids to get involved with, mine loved the whole thing from the coir mulchy messy briquette you pop in a bucket for the worms to live in in the lower layer of their pen to the depositing of food each week and the noise the farm makes now their are literally 1,000's of worms chewing away at the food! Added bonus of course the rich liquid worm poo tea that can be slightly diluted and put on seedling for that added boost in nutrients!
There are a few different ways to start a worm farm but basically you need 3 levels, I was rather tempted to try with 3 polystyrafoam boxes that I would have been able to get free from the green grocer and build that farm that way, but I wasn't really too sure exactly what was required to keep the worms happy so went the more commercial route. We brought 1,000 worms + many castings included in the packet from Bunnings the cost being about $25 and then a large black 3-4 tier farm for the worms and the medium that the worms live in is included. You place that in a bucket with about 9 litres of water and this makes it moist for the worms then tip in and away they go!
I noticed over Summer the population really dropped and I have no idea if they went to the very bottom of the pen, it ends up quiet heavy after putting all that food in but it's April now and my gosh the population had exploded, they are so many I have taken some pictured but when you lift the initial lid and turn the food slightly there are hundreds all looped around each other, very exciting! I put rabbit poo, paper, newspaper, fruit peelings, apparently you can also add dog poo, although we had a separate composting bin for that.
Apparently it is not a good idea to add meat as this can very quickly attract flies and maggots, we did get small vinegar flies but no maggots thank goodness!! I added pretty much most of the plums that I had picked to early this year and they seemed to love those too.
at April 10, 2010